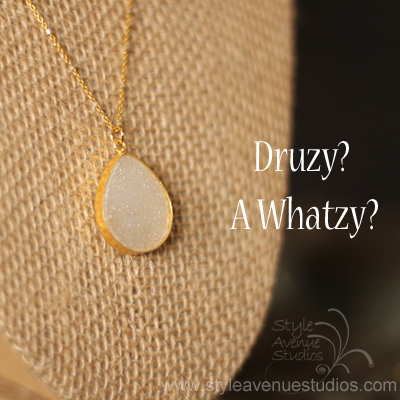 Druzies are a hot in the jewelry world right now. You may not have heard of the name but I am sure you have seen them around. As the image shows above a Druzy is usually a pendant. However,…

The term “Druzy” refers to the tiny crystal which is formed within or on another stone in a large number. When the ground water that carries dissolved silica is forced to get filled into a porous area of rock, rapid cooling occurs and it causes the formation of minute crystals.

Druzy Quartz is a thin layer of quartz crystals covering the surface of a host stone. It is well known that amethyst or citrine get the source of their color from this quartz crystal but usually Druzy Quartz takes the host stone’s color which is seen through it.  ~Minerals Zone

Basically, a druzy is a rough looking stone, but because of the crystals you get this amazing cross between rustic and elegance. Pictures can’t truly do it justice. They are one of my favorite elements to create with these days. Most druzies you run across will be a real stone, however, they are manufacturing glass to look like druzies with extremes colors. Not that there is anything wrong with glass, but just be aware that druzy imitations are out there.

The pendant necklace above is a Druzy Quartz called Druzy Dew Drop (say that 5 times fast!) set in 14kt gold strung on a dainty gold chain.

The necklace below I created with an aquamarine druzy.  A fun fact about this one: When I was wearing this necklace to test its drape my 3 year old son told me, “You have ice, Mommy.” And thus the name Ice! 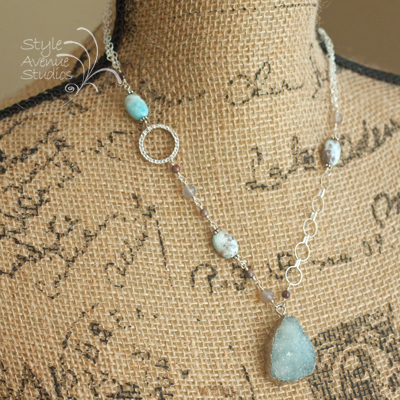 I hope you enjoyed this! Let me know if you like the new druzy fashion. What color druzy would you like to own?

And if you can’t live without either of these, click on the names or the pictures to take you straight to my online store! Have a druzy of a day!

When I’m not creating beautiful jewelry — you can find me cuddling with my 2 kids and 2 cats, sneaking away for wine tasting with my hubby and I almost always have a coffee in hand. View all posts by Emily Wilke

Please log in again. The login page will open in a new tab. After logging in you can close it and return to this page.